The MAN is highly dense (around 3.0 million inhabitants), with peri-urban areas near the Vesuvius volcano. The boundaries of the case-study area are delimited by considering the system of transport and ecological linkages and contain the larger plain area that reaches the Regi Lagni to the north east of the city.

The natural and built environments are highly degraded and compromised. Criminal organisations have significant influence in this area. The Campania Region potentially has 2551 contaminated sites. These are landfills and areas of uncontrolled waste deposit. The region has six Sites of National Interest (SIN), which are polluted areas. 15.8% of the entire region is polluted, a total of 2,157 km2 (ARPAC, 2008). 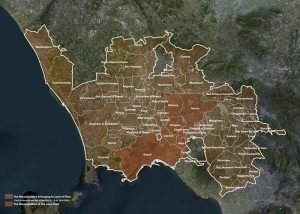